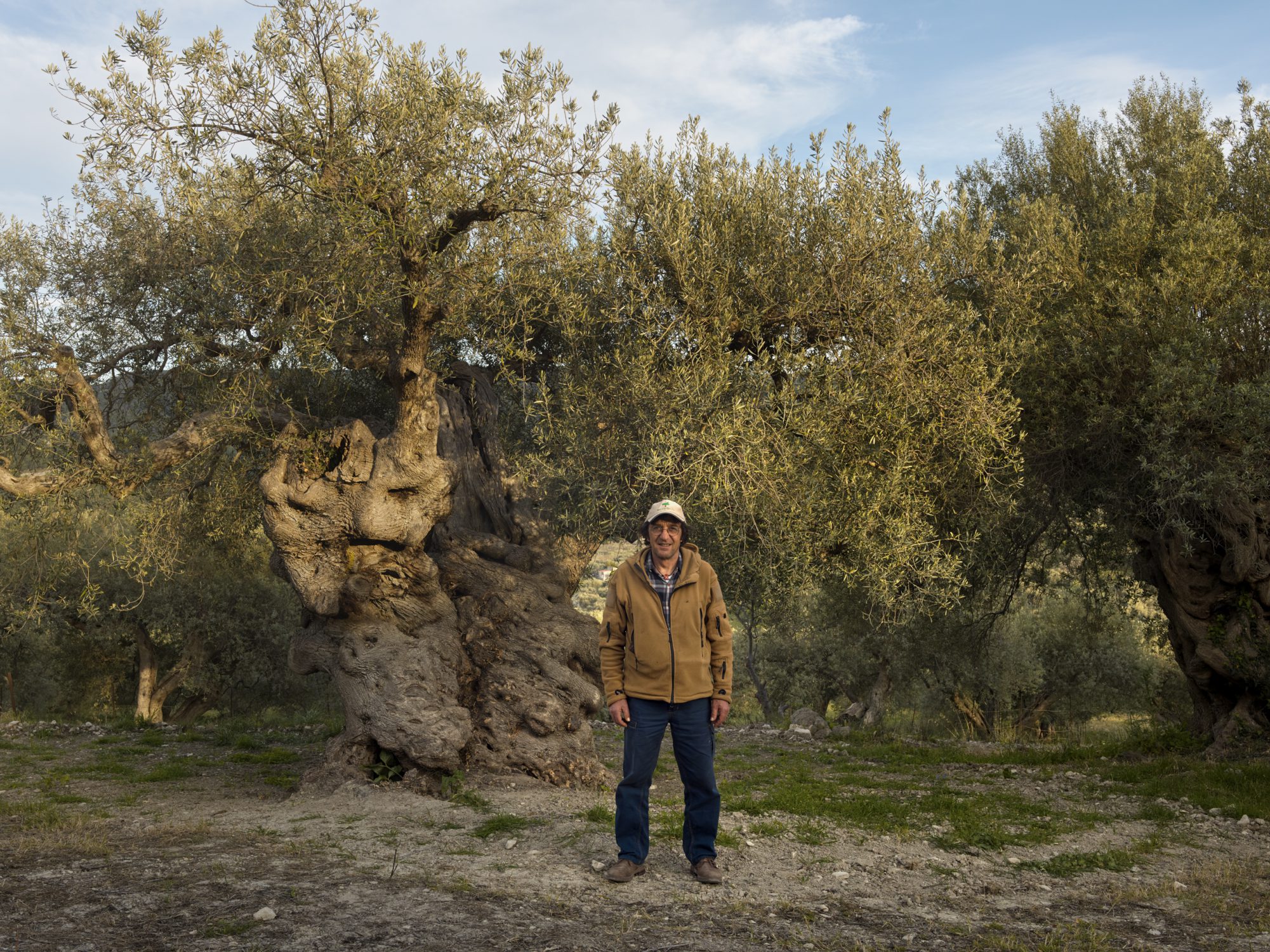 In Sannt’Andrea, an olive grove in the Hyblaean Mountains on the edge of the little town of Buccheri in the province of Syracuse, we meet Lorenzo Nicotra. In the small local community, Lorenzo is known as Pino. He grew up in his father’s olive groves and in 2003, along with his friend Guiseppe Paparone, set up a cooperative to protect the centuries-old olive trees that grow on the steep slopes of Syracuse and to make the best olive oil in the world from them.

Their sons Pietro and Salvatore grew up in the olive groves just like their fathers and became friends for life. After Salvatore’s father Guiseppe died, when they had just turned twenty and were still at university, They took over the olive grove and the oil production. It fills Pino with pride, but he has worries about the future, climate change and the depopulation of his beloved Buccheri. ‘Other than my son and his friend, young people don’t want to work on the land. If we do nothing and cease to look after these centuries-old trees ‘we could lose them completely’. 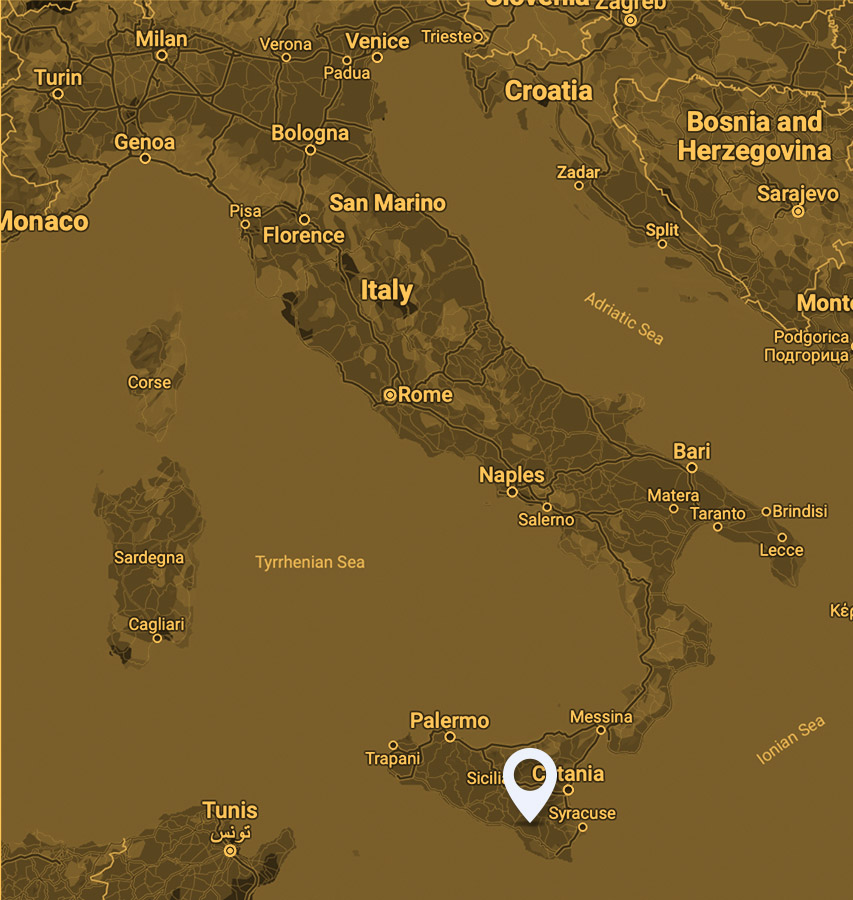 "I’m lucky to have a job that follows the traditions of my grandfather and my dad."

The olive oil produced here, which is sold in practically every country in the world and used by chefs in the best restaurants of Japan, the US and Europe, won just about every competition possible and was several times awarded the title ‘best olive oil in the world’.
It all started with a single bottle. When Pino got to know a German woman who is now his wife, he took his mother-in-law in Germany a bottle of oil as a gift at their first meeting.

Three years later, when he next visited his mother-in-law, the bottle was still on the top shelf of the kitchen cupboard, gathering dust. They didn’t think much of it, but once people tasted it, sales rocketed, first in Germany, then in the rest of the world.

With the help of his mother-in-law and the dedication of his son Pietro and friend Salvatore, who speak several languages and are at home with computers and internet sales, and who travel all over the world to trade fairs and competitions, Pino’s oil grew to become what is now recognized as ‘the best olive oil in the northern hemisphere’, Fiore D’oro. 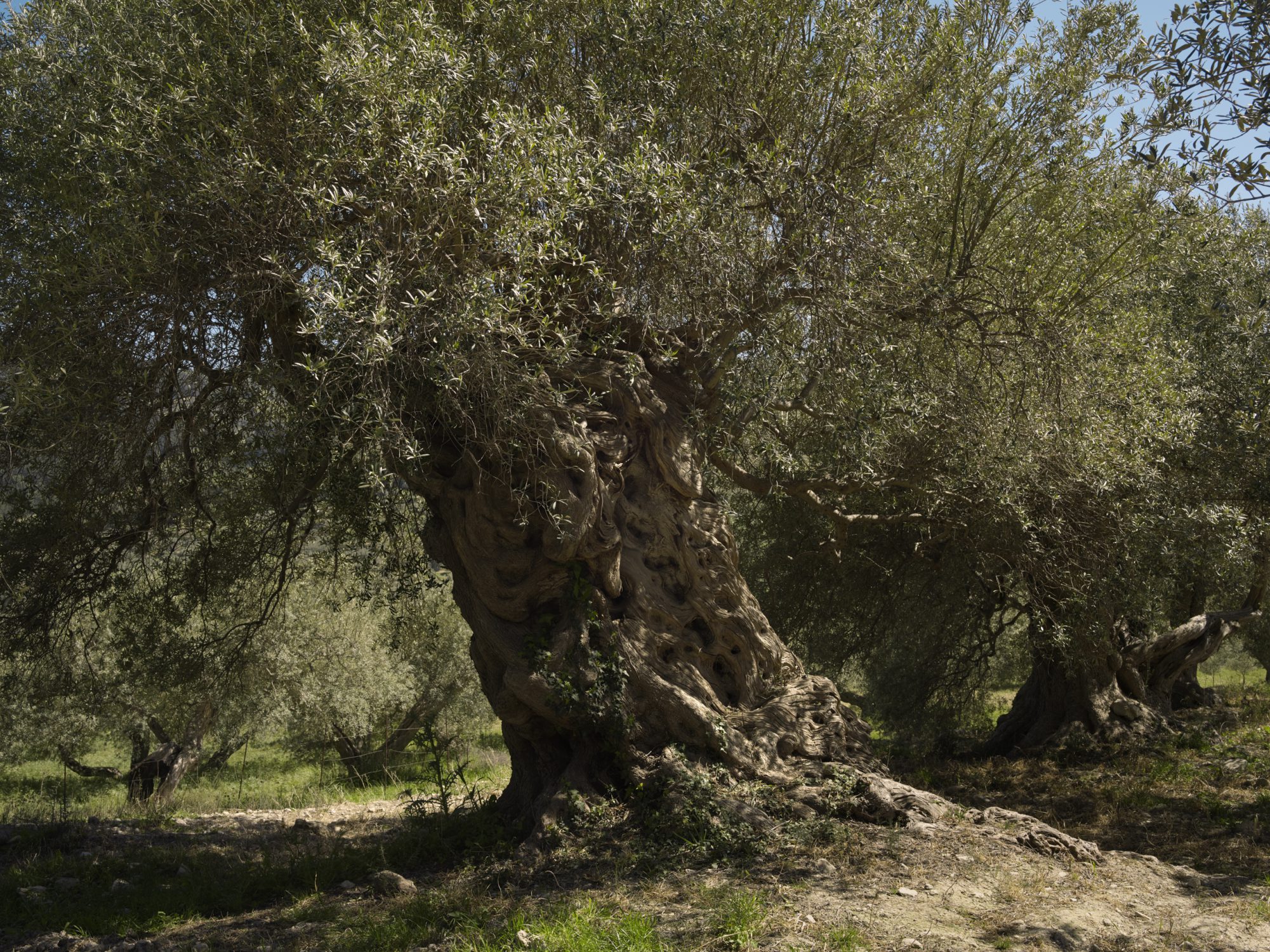 "As a company, we have about 3,000 trees of our own. But altogether we work with about 20,000 trees on 200 hectares. They are all olive groves that we rent from other people."

"These olive groves in the Hyblaean Mountains, are part of the small town of Buccheri in the province of Syracuse."

This abandoned villa once belonged to one of the three major landowners in this region, where olive oil has been produced for centuries. The many small farmers would bring their olives to the villa to have them pressed. The villa, with its old stone mill and olive presses, has been empty for years. Pino dreams of restoring it and turning it into a museum about olive oil. It currently serves only as a storage place for Pino, and occasionally as the setting for a barbecue that he organizes for his workers. 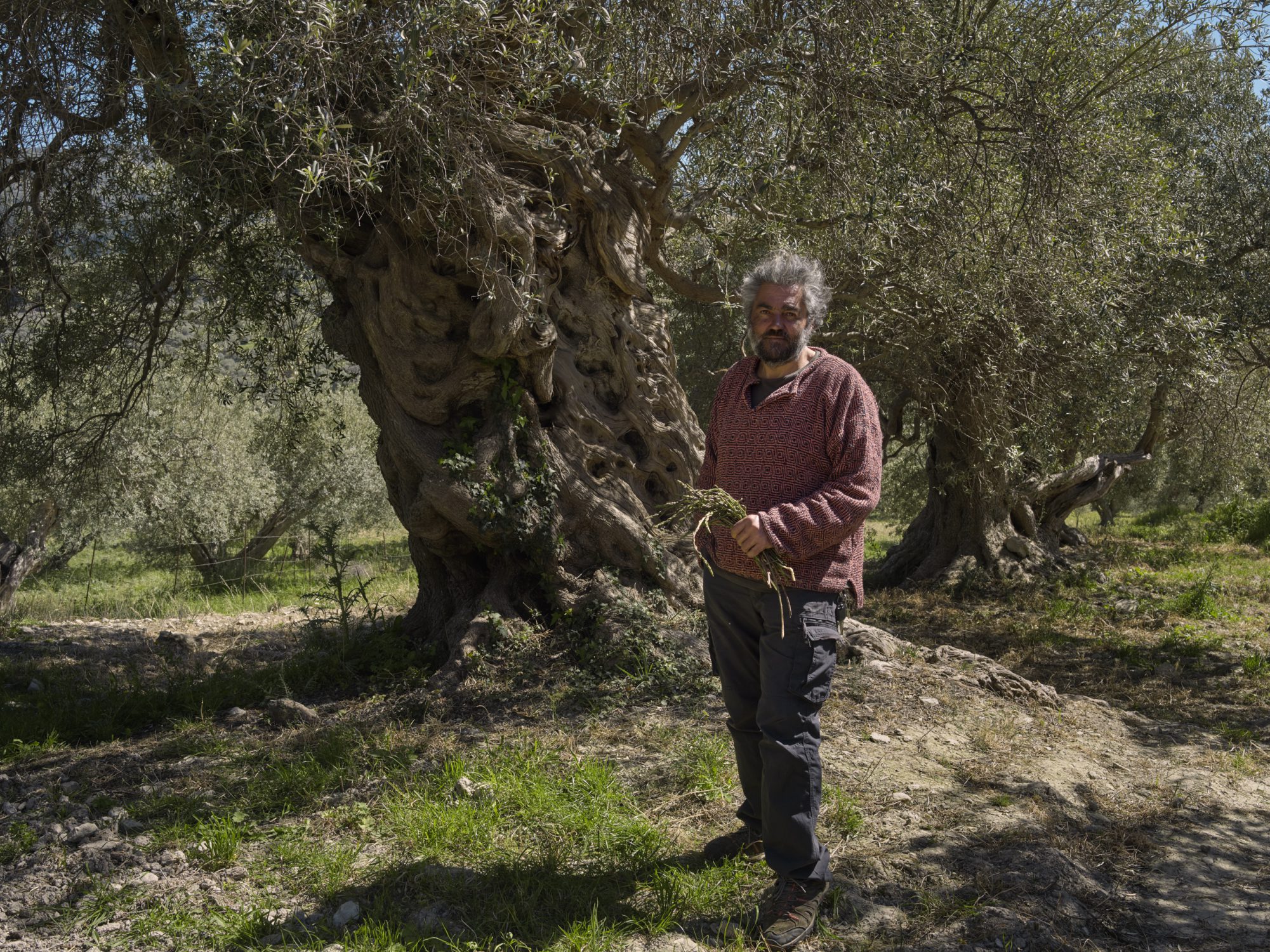 Anyone travelling through the area in early spring will come upon pickers of wild asparagus. Some sell them from stalls at the roadside, but most pick them for their own consumption: men in suits who park their cars at the side of the highway, restaurant owners who prepare them in their own kitchens or, like Franco Vacirca, Pino’s foreman, who pick them to eat themselves. They are irresistible, free, and grow only in the wild, under trees.

Pino invites us to go with him to one of the olive groves where a group of Romanians is pruning the trees in the early morning, before the hot sun makes working there impossible.

It’s the last day here for this group of Romanians; their work is done. Most live here in Italy, but a small group of these seasonal labourers will return to Romania tomorrow, so this afternoon there will be a barbecue in the courtyard of the old abandoned villa, to which we have been invited.

As well as beer and the farm’s own wine, bread, black olives and olive oil, there are sausages and bacon made from one of the wild boar that live in the olive groves. Pino has a ‘gentlemen’s agreement’ with the boar. They can live among his trees all year round and eat his olives, and he can sacrifice one of them each year to make the tastiest sausages we have ever eaten. 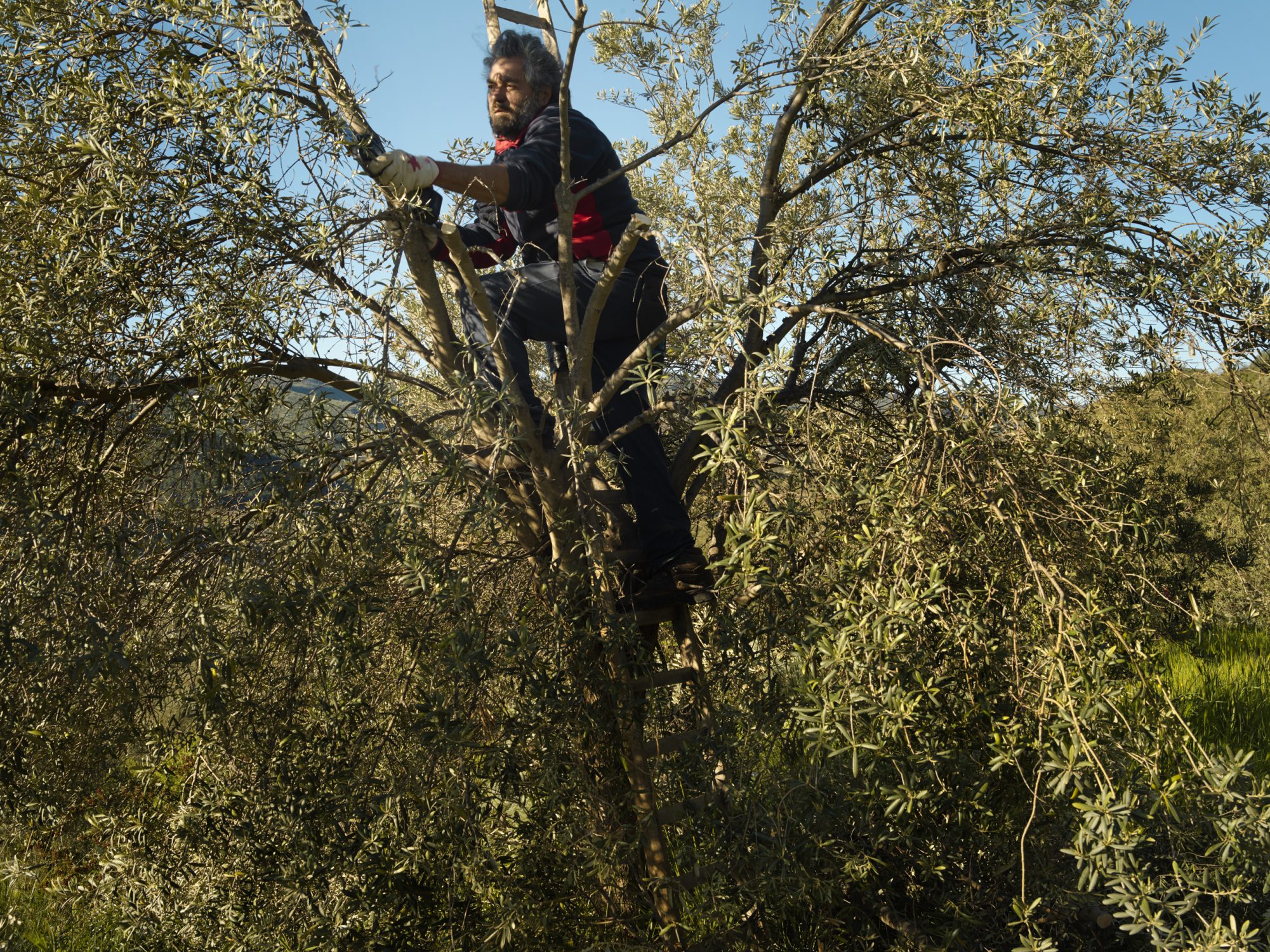 "If we don’t keep the land clean and look after the trees we could lose them completely." 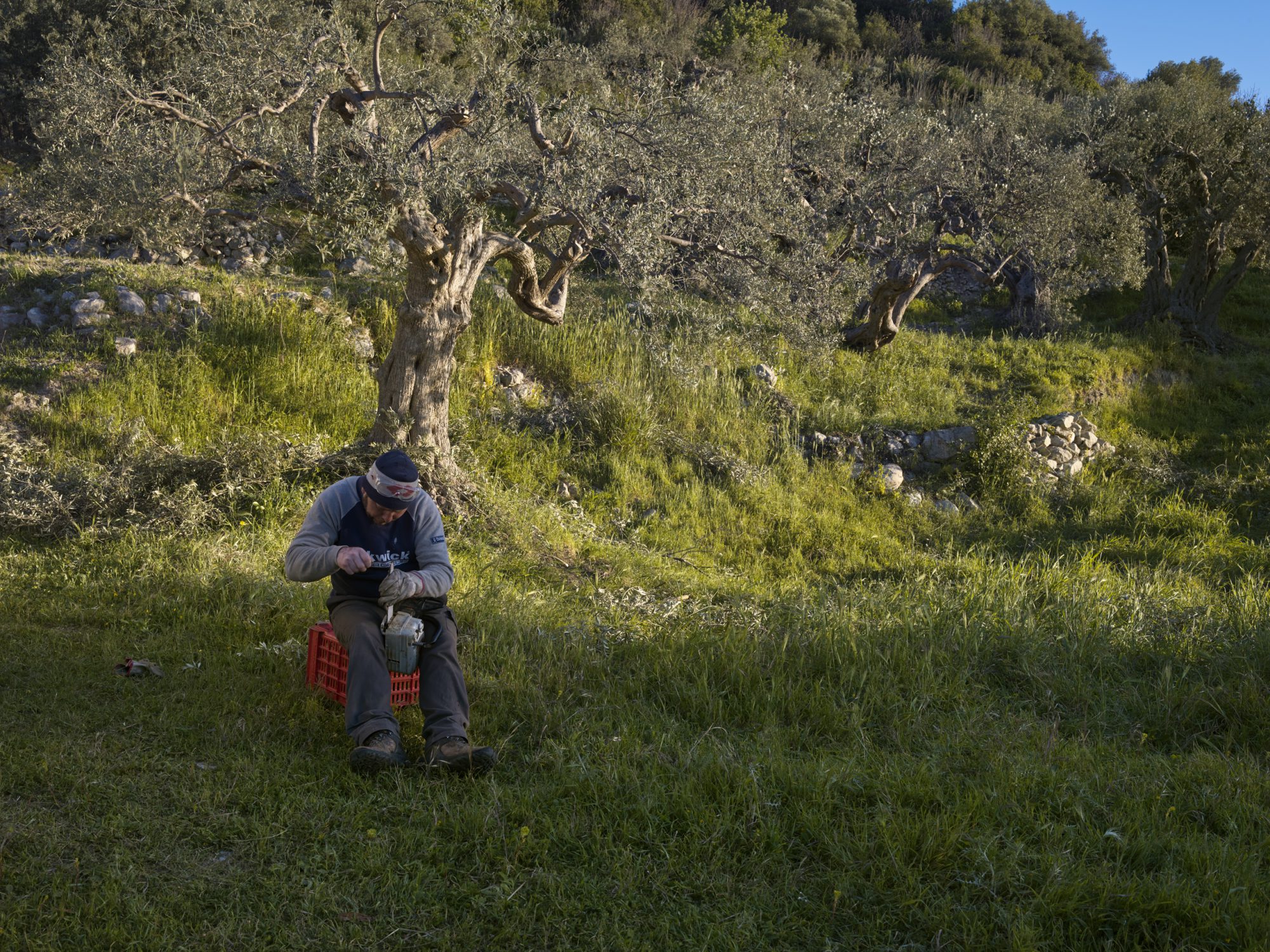 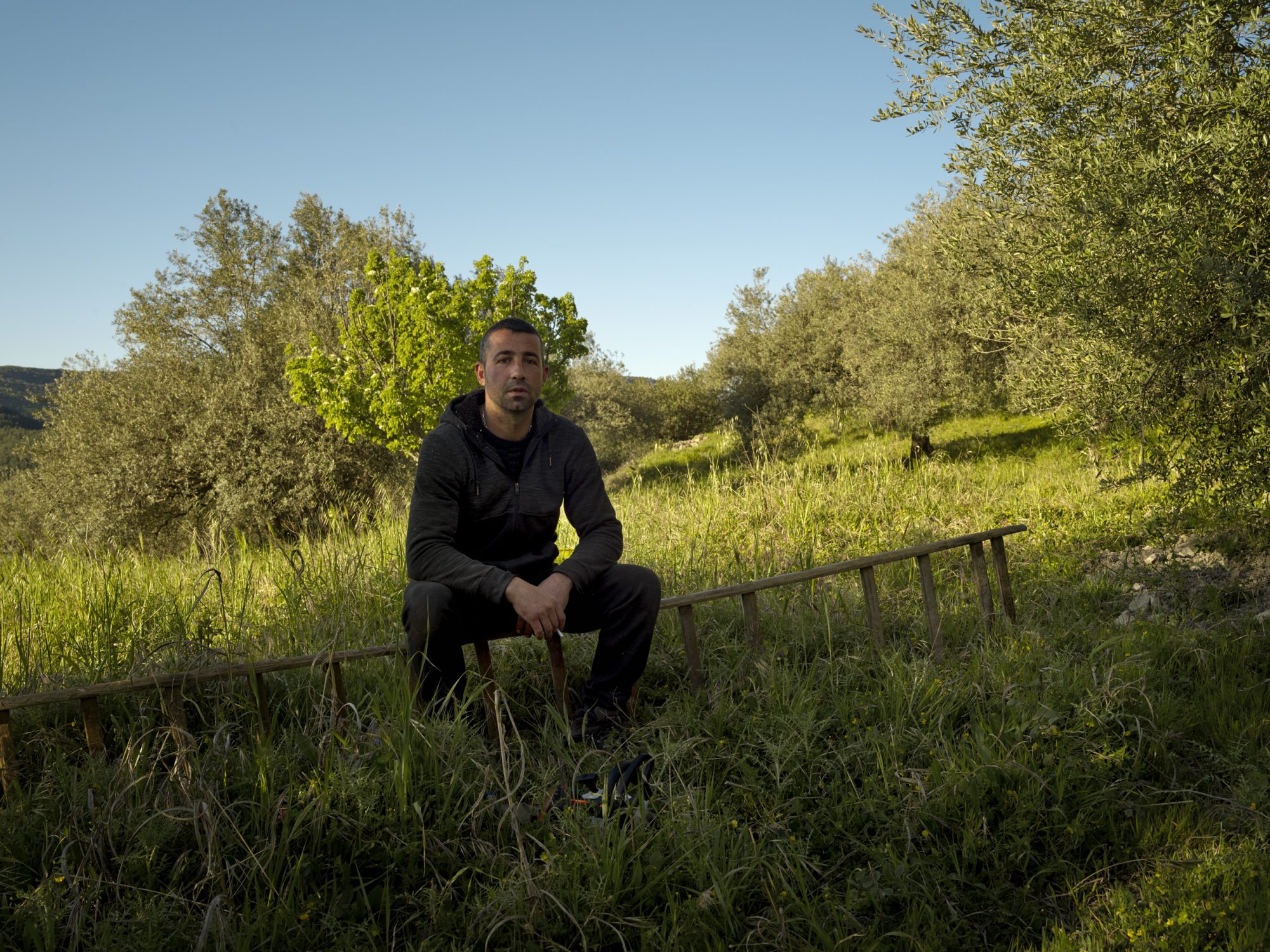 "I hope to involve more young people, so they find a way to earn enough. Otherwise Buccheri, as a mountain town, is on the brink of disappearing." 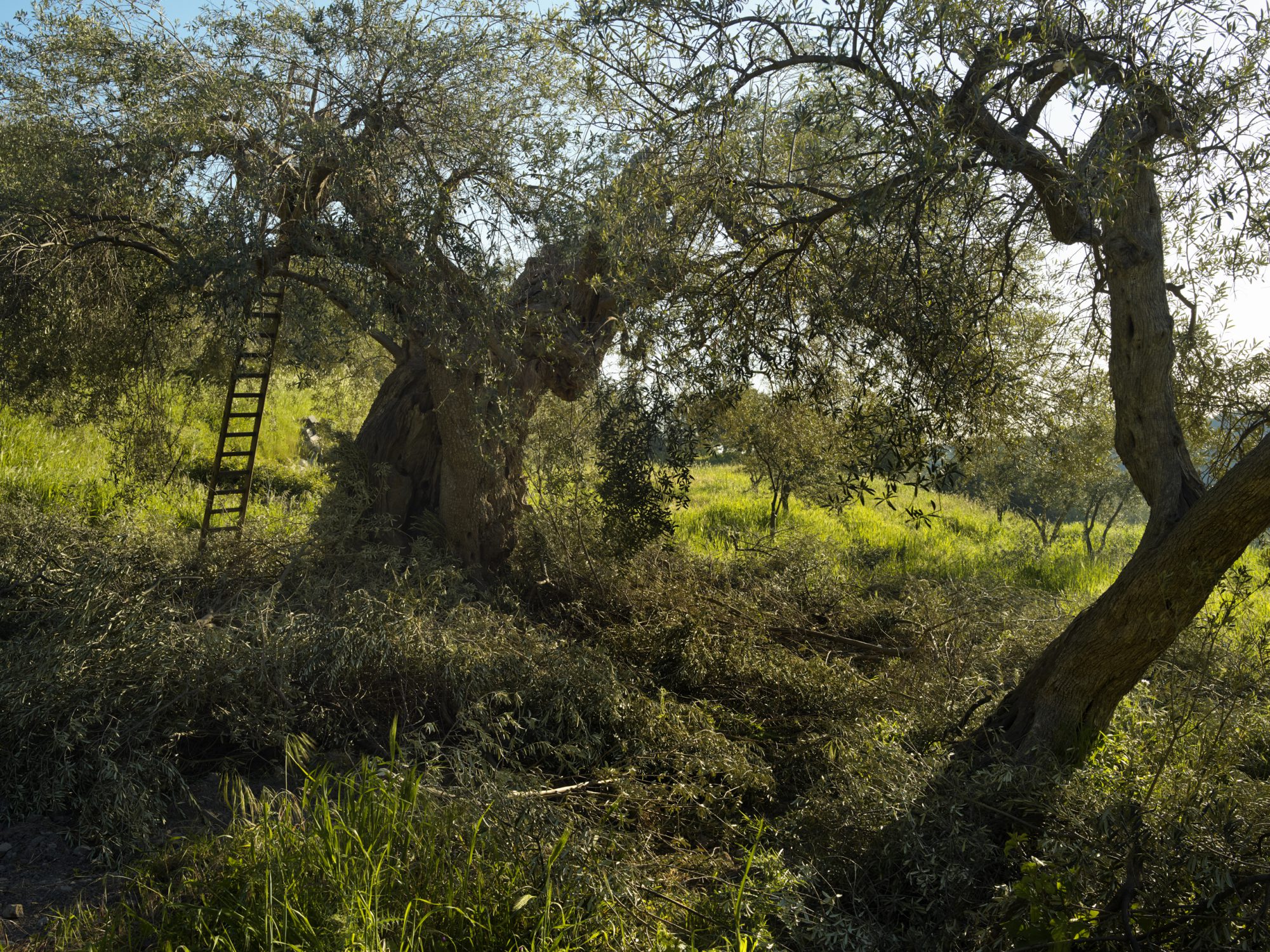 "For some reason, working the land is not considered a good job or a well-paid job. But when it is done well you can earn a good income." 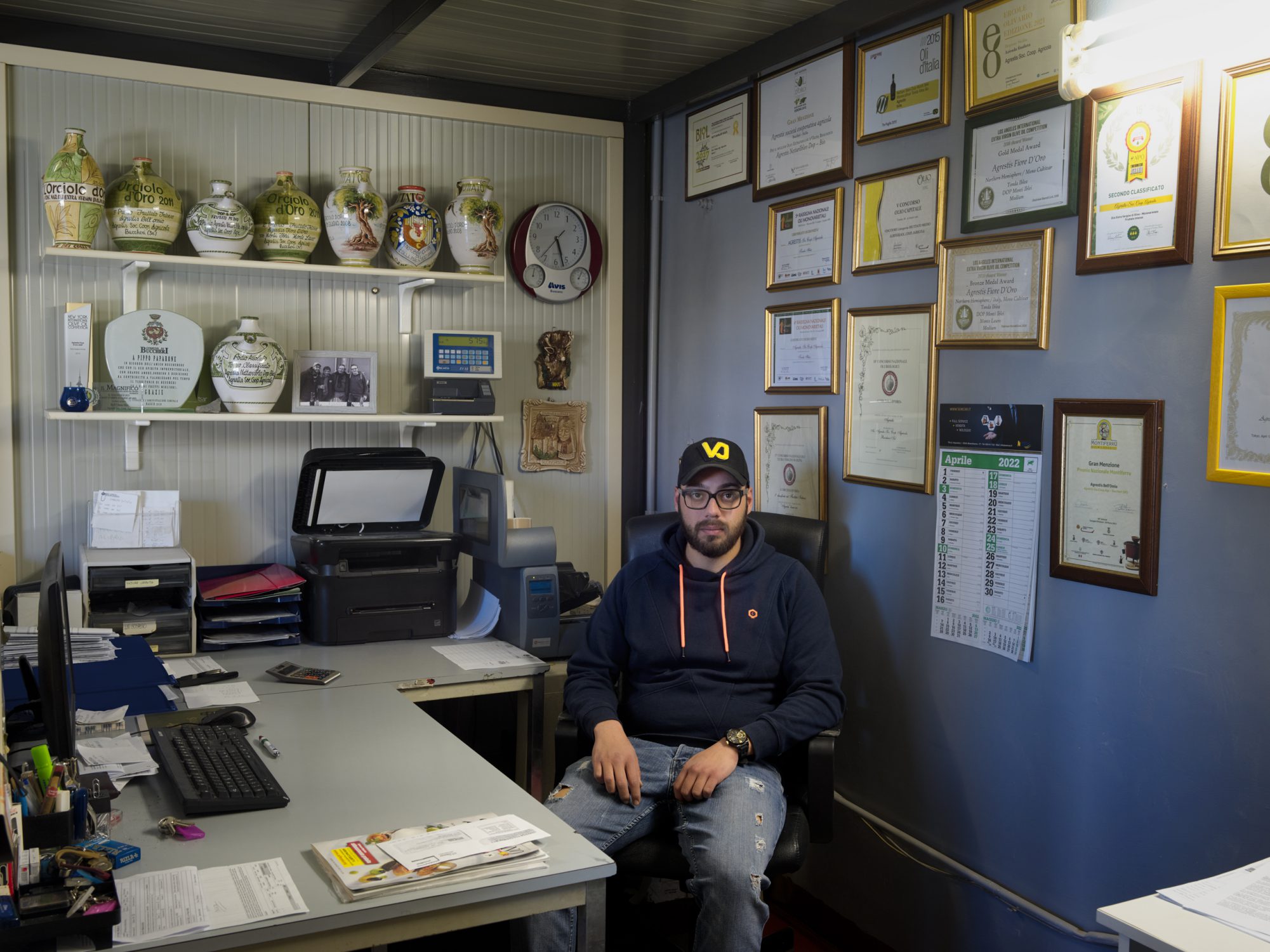 "the best olive oil in the northern hemisphere’, Fiore D’oro."

Pietro Nicotra, who took over the leadership of Agrestis with his friend Salvatore Paparone, is away on a business trip. Salvatore, who is holding the fort, is in the office of the small storage space and bottling plant. The walls of the small office have barely enough room for the certificates and awards they have received for their oil. 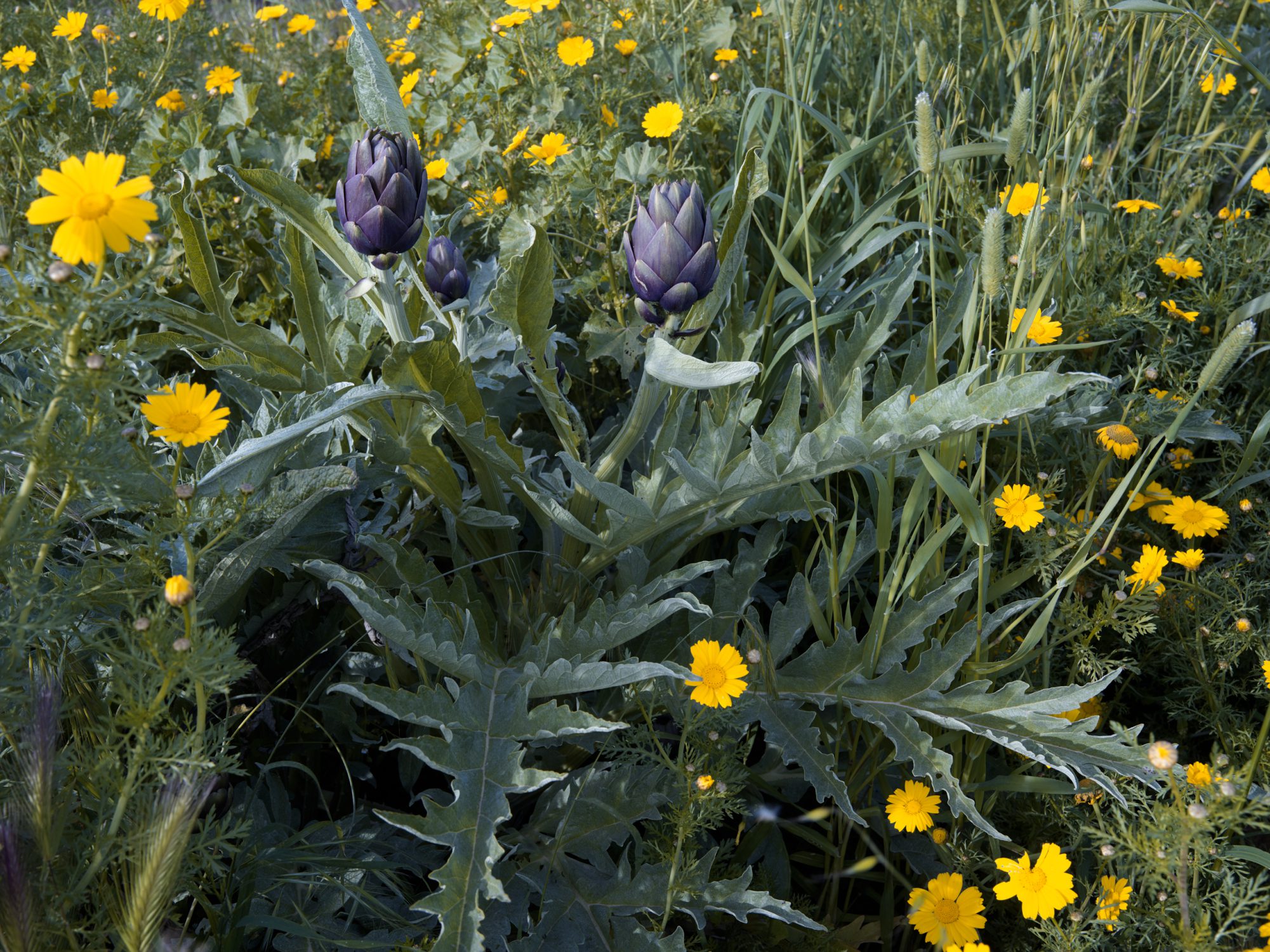 A family farm in Acate Sicily