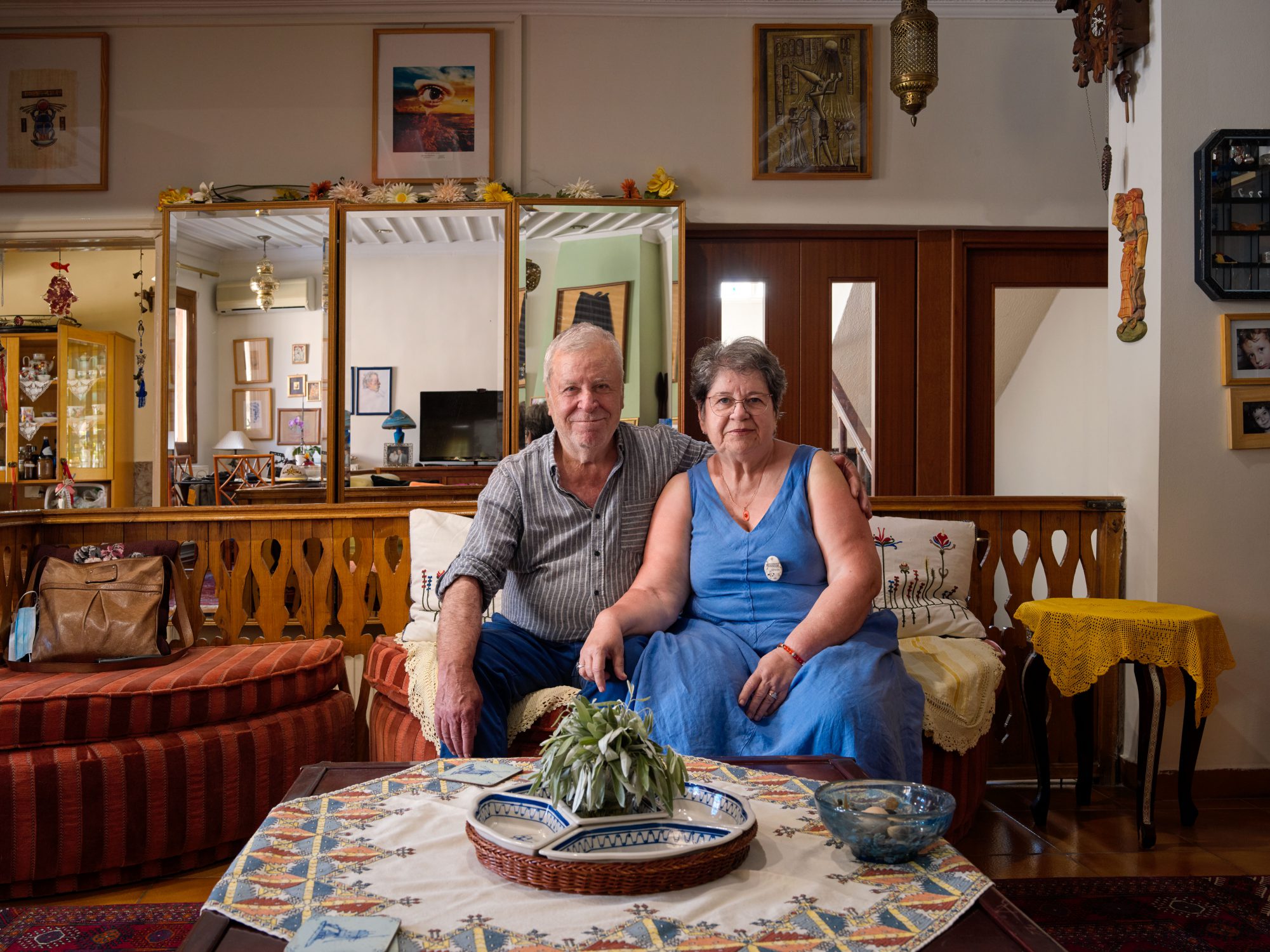 A life devoted to the land 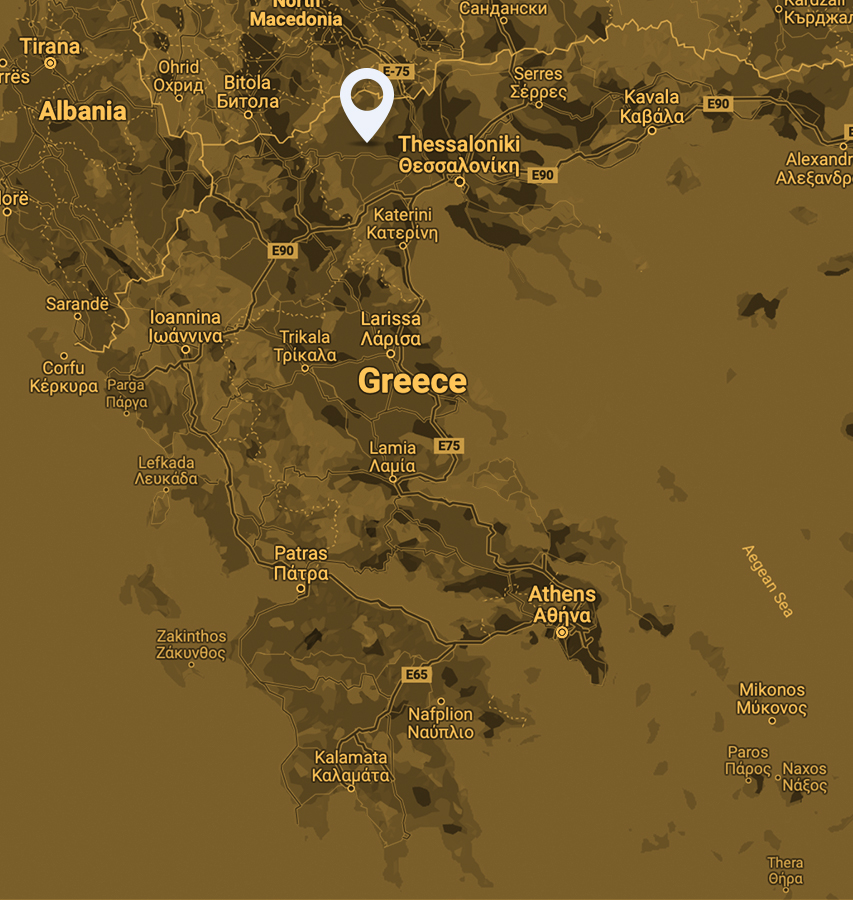 A life devoted to the land

The story of Taki and Eleni Charantonis is the personal story of a life devoted to the land and of a battle against the use of chemicals in agriculture. It tells of a couple that together has moved mountains and now, in retirement, remains active in sharing the knowledge gained from the many trials that Taki has carried out, and is still carrying out, in his own orchards. 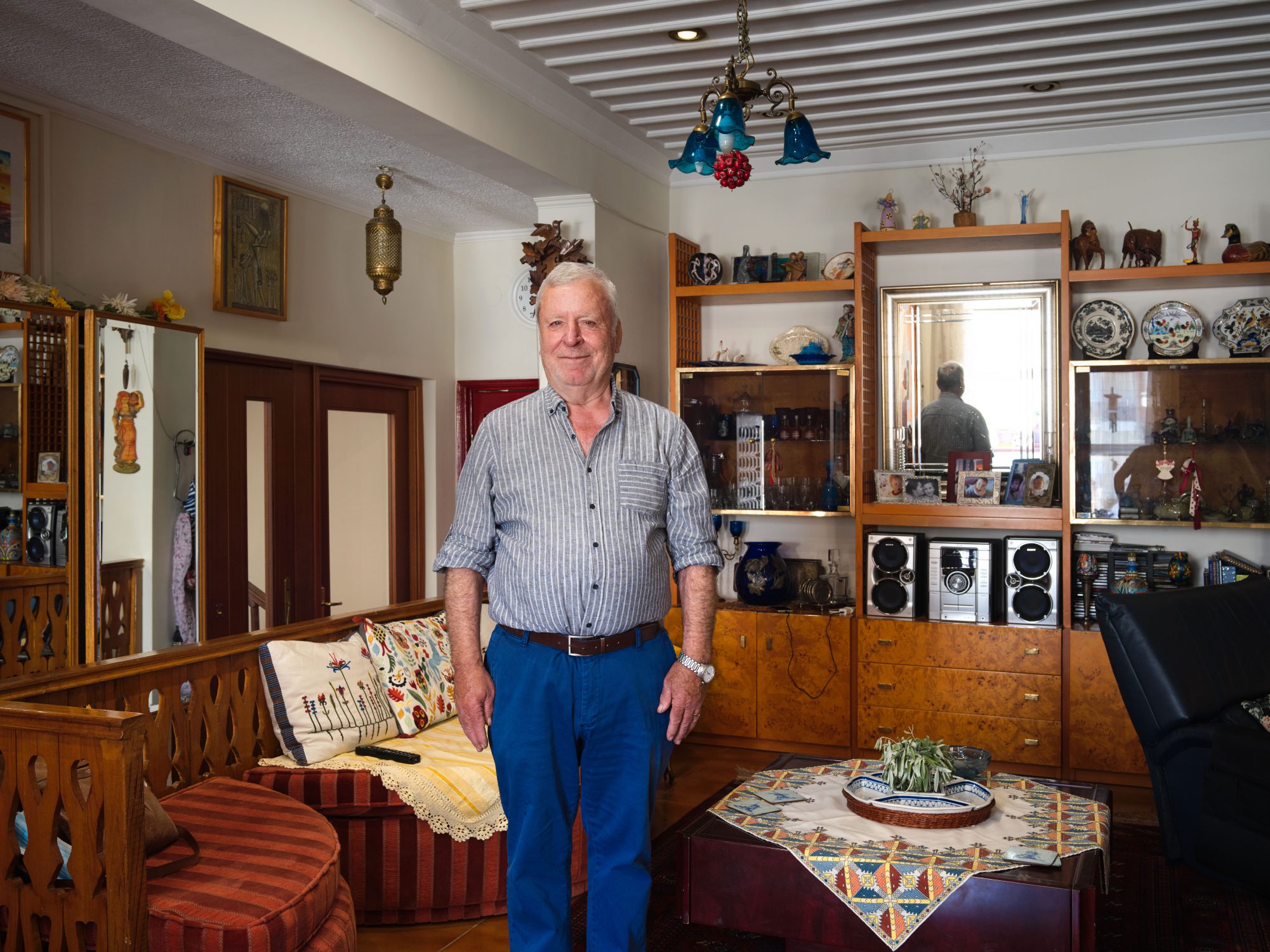 Taki, born in Kolindros in 1948, was interested in a career in farming from an early age, although his father was determined that he would become a teacher. He rebelled against his father and decided he wanted to study agriculture.

When Taki was sixteen years old, his father was leader of the union of cherry producers and the boy was allowed to go with him on a field trip. It took them to an experimental farm at the University of Thessaloniki. There Taki heard about the creation of hybrid seeds and about chemical herbicides and pesticides. From that day on, he knew that his future lay in farming.

He took two degree courses, in chemistry and in agriculture, and during his studies he worked on the land. His father had an olive press and Taki’s first job was to produce olive oil.

After his military service, Taki was unable to find a job in the public sector. A friend approached him to suggest they open an agricultural supplies shop together. The friend had worked for Heck Bio-Pharma. A time of pioneering began. They visited farmers and growers by bicycle. Agriculture in Greece was still quite primitive in those years; it was marred by poverty, and farmers and growers used very traditional methods. Chemical treatments were the holy grail in farming and they needed to be sold.

In 1972 Taki undertook a trip to Crete, where the first simple plastic greenhouses had been built, in Ierapetra. There he saw that practically all the growers were applying methyl bromide, an odourless and colourless gas that was used intensively to sterilize soil. Taki was impressed by the results and back in Skydra he visited the best grower in the district, who was encountering serious problems with his soil. Taki advised him to use methyl bromide.

The grower had an apple orchard next to his greenhouse that was barely producing fruit any longer. He decided to grub up the apple trees and expand his greenhouse. Taki saw to his dismay from the dividing line between the greenhouse and the former orchard that the soil where methyl bromide had been used was severely polluted. It was the first time he had realized that using such chemicals represented a significant threat to the environment.

Not long after that, Taki and his wife Eleni took a trip to the Netherlands, a reward from from the chemical industry for their sales efforts. With Westland, famous for its greenhouses, and Wageningen University, the Netherlands was a mecca for modern farmers and market gardeners.

They visited Wageningen, where for the first time they saw experiments with the use of rock wool substrate in which vegetables are grown in greenhouses. Taki was full of questions, and they were asked by Eleni, who could speak English. Taki found it impossible to imagine that healthy vegetables could be grown on glass wool, and he wanted to know from the entomologist whether he would feed his own children on vegetables cultivated in such a way. The entomologist’s answer made a great impression on Taki. ‘I’d feed them from the soil, as long as it was alive and not poisoned with methyl bromide.’

The entomologist was able to tell Taki about a company called Koppert that bred insects as natural pest controllers. The couple visited the headquarters of Koppert in Berkel en Rodenrijs and arranged for Peter Koppert to come to Greece to see what opportunities there might be for a collaboration. Taki was starting to realize that the pesticides and other chemicals he was selling were a road to nowhere.

Then, fifteen years after its publication in America, the Greek translation of Silent Spring by Rachel Carson came out. The book had a huge impact on Taki. It was to change his life for ever.*

Peter Koppert visited Greece and they decided to embark on a joint venture. Eleni, who had worked in education up till then, became Taki’s business partner and together they began a period of pioneering, by trial and error.

‘The government institutions put me through an ordeal that lasted two years because they didn’t know who to make responsible for the import of insects. After that the products still had to get past customs control. I lost the first batch. Then I lost the second batch. That was because they all had to be counted. You should hear what we had to go through.’

“During those first two years I was really desperate.
But we persisted because we believed that our country should follow that path, because it has so many advantages.

And after all these years the most important one for me is that people who use this method actively participate.
When you use pesticides you let agrochemical companies solve your problems for you. In biological management, the growers themselves participate. They look for solutions.

That’s the best thing for all of us. It helps that every single grower can contribute.”

"During the first two years I was really desperate. But we persisted because we believed that our country should follow this path" 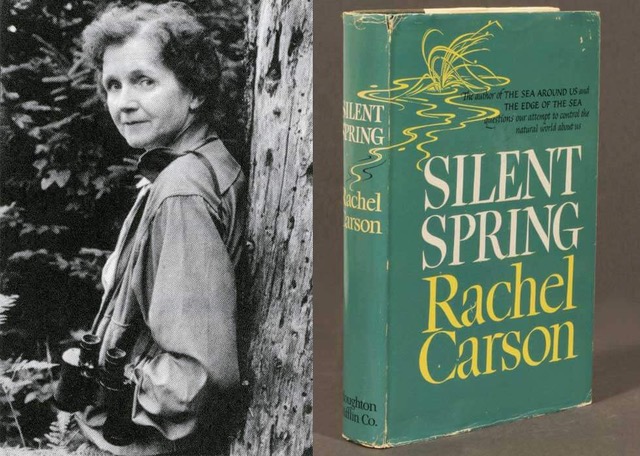 "The book that changed my life"

In 1962 the book Silent Spring by American biologist Rachel Carson was published, in which she described a town in the future where all the birds died as a result of the widespread use of chemical pesticides and herbicides. The book had an explosive impact. Carson was one of the first to explain how just one chemical could destroy an entire ecosystem, with fatal consequences for plants and animals.

Back in time
It was the early 1960s and with the Second World War receding into the past, the economy was booming. America had the war to thank for the invention of DDT, a highly poisonous pesticide that had proven effective in preventing soldiers from becoming ill with typhus, a potentially fatal disease spread by lice that could be controlled with DDT. After the war it was deployed on a large scale and every home had a manual spray pump. Children’s hair was treated with DDT and even wallpaper was impregnated with it. On television and in magazines it was recommended as the ideal insecticide, with no downside to its benefits.

DDT was used in agriculture on a huge scale too. As prosperity increased and global trade grew, more and more invasive insects hitched a ride on products from distant countries.

When the Japanese beetle turned up in municipal parks, entire housing estates were sprayed with DDT and within two days the gardens and parks would be full of dead birds, while dogs and cats showed symptoms of serious illness.

Rachel Carson was working for the US Fish and Wildlife Service. She began to document the impact of the excessive use of DDT and wrote an article about it. None of the major magazines and newspapers wanted to publish the article, fearful as they were of getting on the wrong side of the chemicals giants, who were their most important advertisers.

She decided to start writing a book on the subject.

In Silent Spring Carson describes the effects pesticides have on animals and goes on to show how they damage human health and, among other things, can cause cancer. To cap it all, she argues that DDT often fails to achieve the intended objective, since the exotic insects it combats often return tenfold, with resistance to the chemical.

When the book was published in 1962 it shook the world. The industry began a counter-offensive, but eventually there was no escaping reality. DDT was taken off the market in the US in 1972 and in 2001 a worldwide ban was introduced. Today it is permitted only for emergency use in combatting the malaria mosquito.

The ban on DDT was not the only achievement of the book Silent Spring. It is now seen as the start of the environmentalist movement.

"There was a strange stillness. The birds, for example – where had they gone? The feeding stations in the backyards were deserted. The few birds seen anywhere were moribund. They trembled violently and could not fly. It was a spring without voices." 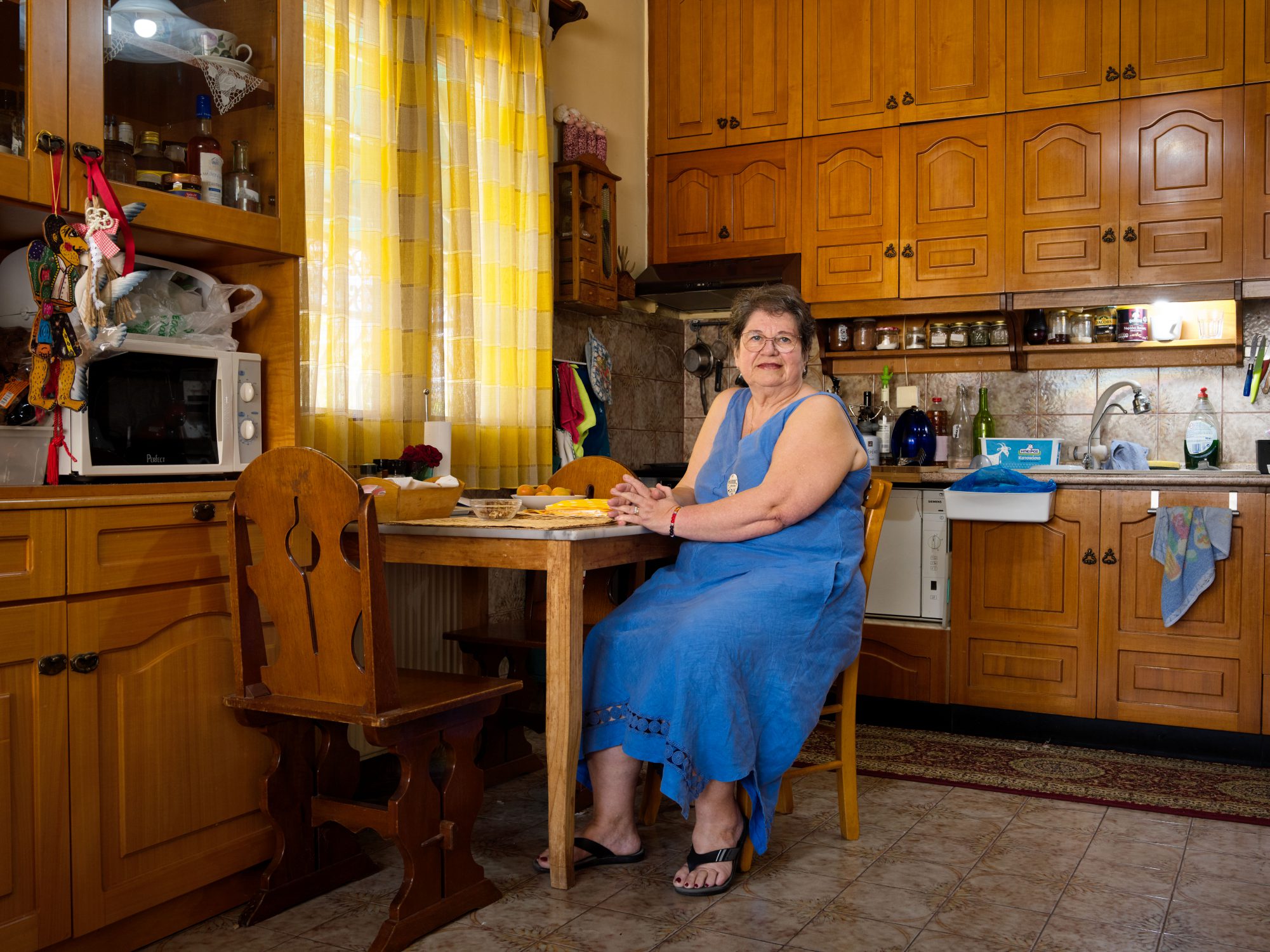 Step by step, year after year, despite a lot of difficulties, the government came over to our view. The growers, of course, were with us from the very beginning. And the agronomists also admired what we did. Being famous all over Greece for our knowledge of the subject encouraged us to continue.

That went on until 2000.
Then a tragic thing happened to our family.
We lost our daughter. And I stopped working. I refused to continue to work.
I wanted to channel my pain into working with women. I started working with women, with other women from Skydra.
We created a support group where women support each other. I ran a project for the European Union. About how to help women start their own businesses.

In about 2012, Taki closed the company
because he was ready to retire.
So he stopped and we sold the company to our employees.

Now we are free

"We believe that in our life, we are just a part of the Earth. Just a part. Just a drop, a small stone. A small rock." 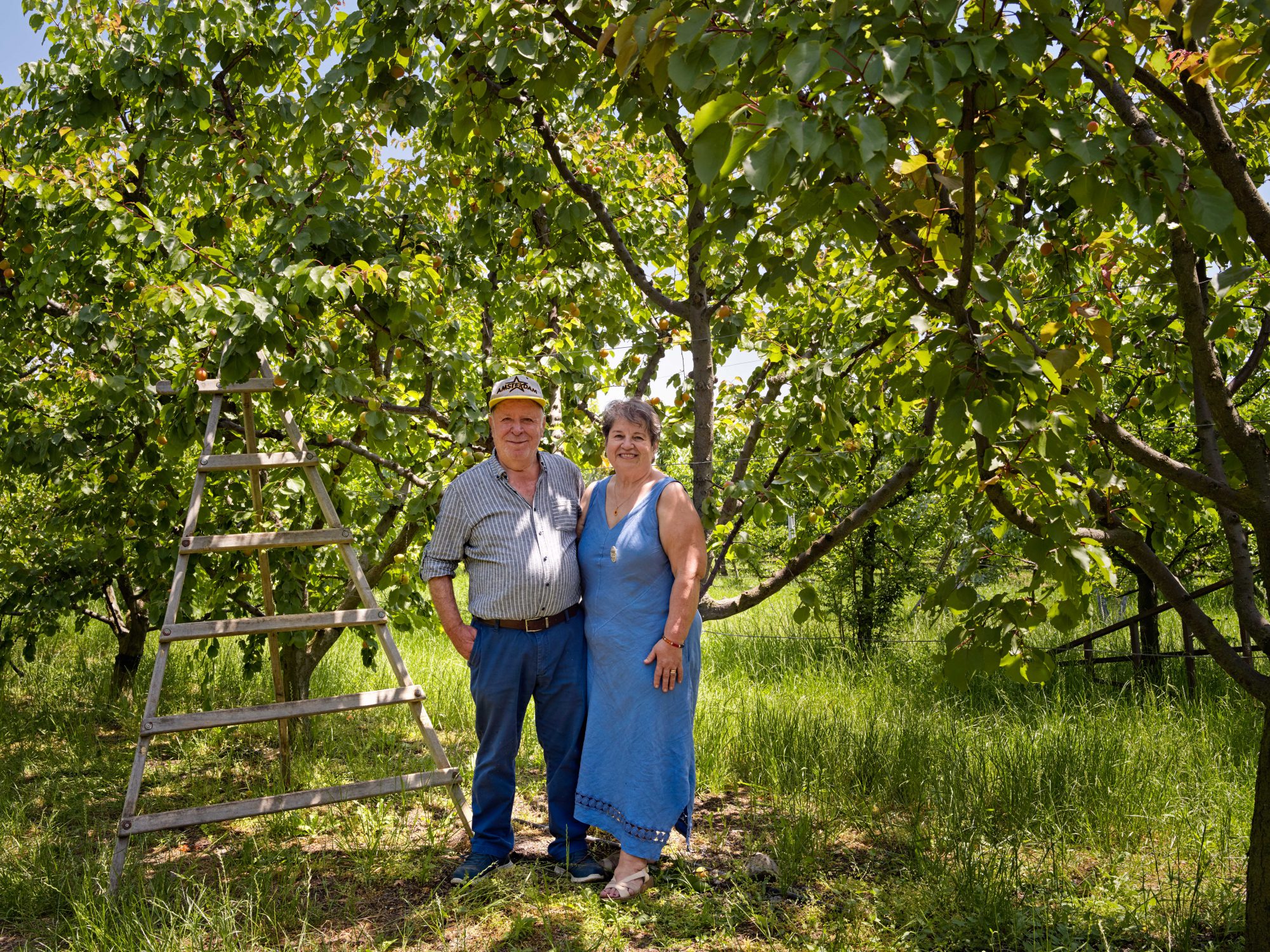 "We started the Garden of Eden; for ourselves, for our children, for our grandchildren. And for our friends." 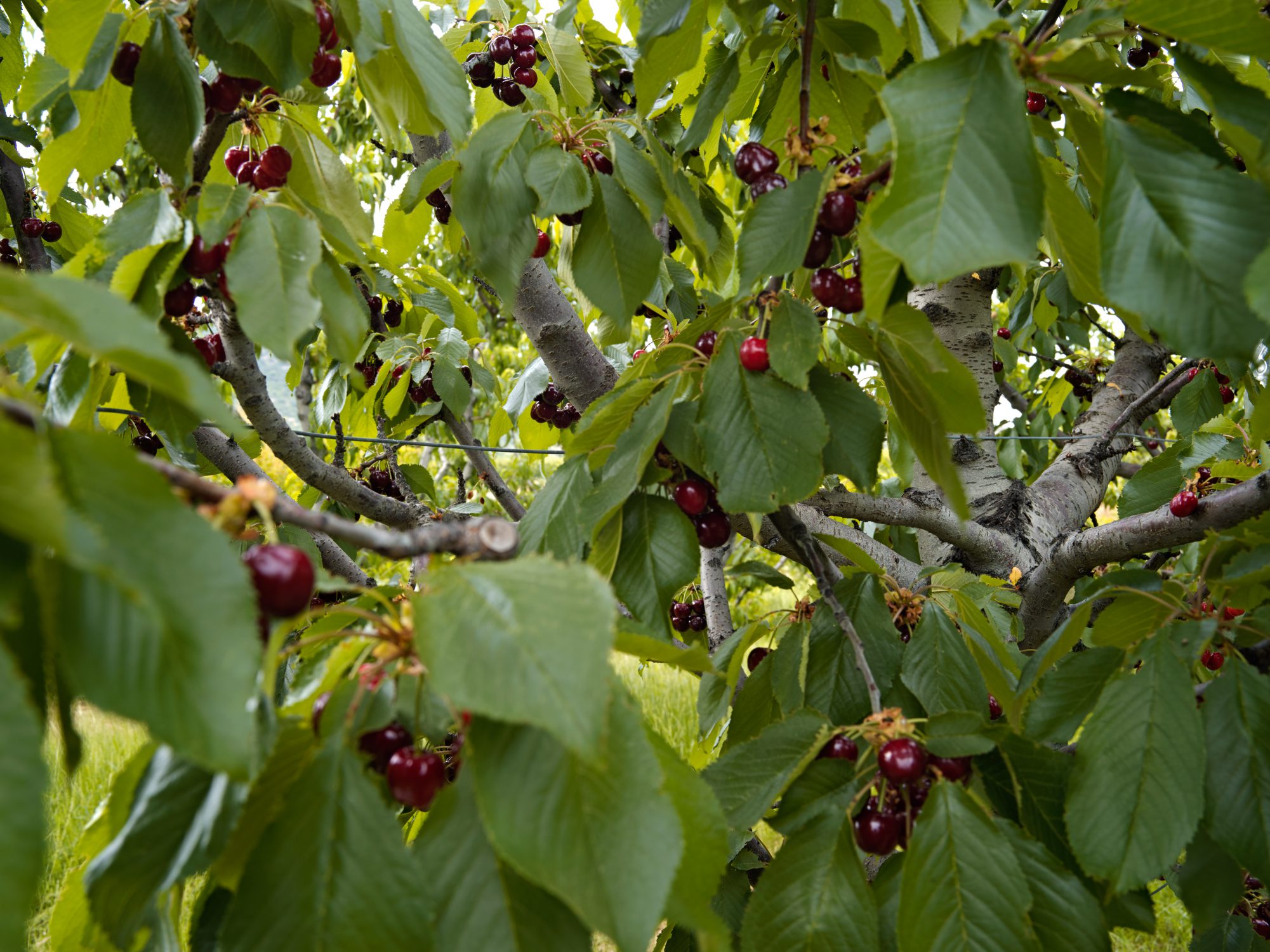 I kept asking my husband for our own farm,
because I was a little bit jealous.
We helped everybody grow healthy plants,
but they weren’t ours.
So he said OK.

My dream was also his dream
We bought land close to us,
and there we created The Garden of Eden.
Because I wanted to have a garden.
To have fruits and vegetables, all kinds of fruits that can be produced in our area. In Northern Greece.

So we started The Garden of Eden
For ourselves, for our children,
for our grandchildren.
And for our friends.

"We wanted to have a garden. To have fruits and vegetables, all kinds of fruits that can be produced in our area. In Northern Greece."

More stories made in Greece